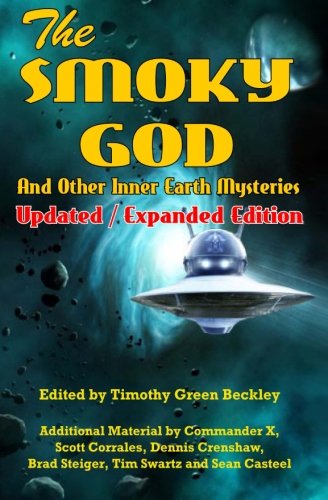 REVELATIONS ABOUT A BLOCKBUSTER DISCOVERY -- SCIENCE BE DAMNED! OUR PLANET IS HOLLOW AND LIFE EXISTS AT THE EARTH'S CENTER AND THROUGHOUT A VAST TUNNEL SYSTEM. THE INTERIOR OF THE EARTH IS NOT MADE UP OF MOLTEN LAVA, BUT HOUSES A VAST CIVILIZATION UNHEARD OF BY THOSE LIVING ON THE PLANET'S OUTER SURFACE. A rare, but all-too-true book, THE SMOKY GOD, tells of a fantastic journey made inside the Earth where the author meets a race of giants who befriend him. This valuable manuscript was believed to be lost for all time but is now available in its entirety, along with other incredible material that provides important evidence that our Earth is hollow and populated by a super race believed to be related to those who once resided on the continents of Lemuria and Atlantis. Also included in this monumental work: ** The first interview ever with the princess of the underground city beneath Mount Shasta. ** A full description of the Agharta Network, its major cities, language, government, transportation, financial system, childbirth, age and Ascension. ** Underground locations of alien and Atlantean encampments and the existence of motherships and crystals the size of a New York City skyscraper. ** A fully-ordained minister's examination of Biblical references to the inner earth and its population of ten million, as well as the story of an ongoing war between inner earth and outer space people. ** An assessment of what one government official calls a "foreign military incursion" of British and American agents who show an inordinate interest in subterranean tunnels in which paranormal and "unusual" events have been known to transpire on a regular basis. ** How the discovery of one South American tunnel system caused this national government to declare that this discovery "may change our perspective of history!" ** Revelations regarding the existence of ancient mind reading "telog" devices that can scan your home and your brain, as well as other technologically advan